“Don’t miss the Willy D’s Dueling Piano show where everyone goes to have fun!” 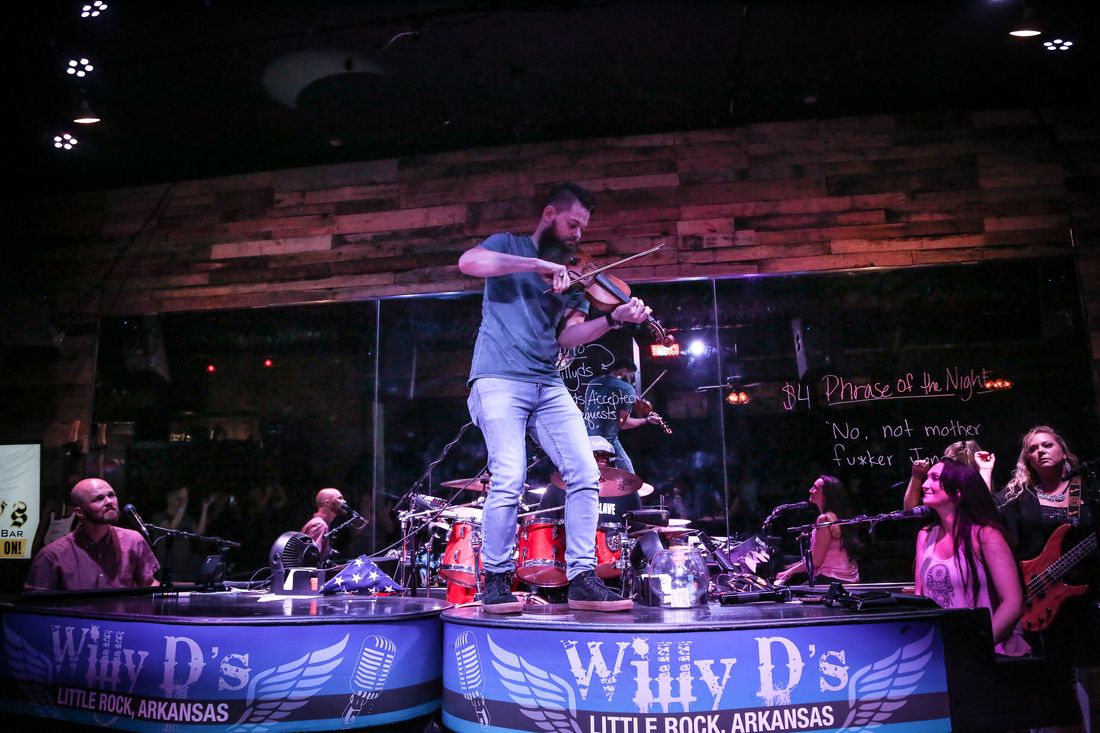 Get ready to party, sing, dance, and laugh the night away! Our Willy D's talented piano players bring you a high energy, all request, comedy, and interactive show for an unforgettable night with your friends.

Each night at Willy D's, two to four piano players take your requests. Our talented entertainers can play it all – from Bruno Mars to Johnny Cash, Jimmy Buffet to Lady Gaga, Lynyrd Skynyrd to Snoop. Our world-class performers can play more than just the piano! Periodically throughout the show, you will see everything from drums to fiddle and guitars.

Whether it’s a birthday celebration, bachelorette party, corporate gathering, private event, or just a hot night out with friends, Willy D's is the perfect venue for any occasion. We make every event unique and unforgettable. Also, check out our CALENDAR to see who is playing each night!

Matteo Ellis is a musician and entertainer originally from Austin TX, now currently living in Little Rock. He has been performing for over 10 years in dueling piano bars across the south and has been playing now for Willy D's for 8 years. He is a multi-instrumentalist with a passion for laughs and any music as long as it's good. Comedy is in his blood, come out and see, it's a guaranteed good time for all.

Little Rock, Arkansas native, Pamela Hopkins, is a singer, songwriter, and multi-instrumentalist. Her first Nashville album of all original music was released in February 1995, and she got back in the studio recording her second album/EP project that was released in October 2018. Pamela also released 2 singles in 2019.

Pamela got back in the studio in the spring of 2020, in Franklin, TN, to record her next 4 singles with Off the Row Recording Studio as one of their "Break Out Artists."  She is super excited to let her fans hear her new co-written songs, as well as the fresh country sound with writer Jim Femino.

In 2021, Pamela has 6 fresh new songs to release throughout the year.  She co-wrote each song with various Nashville writers and is excited for her first co-written duet featuring Matt Dame, to be released on February 5, 2021 titled "Little Things."

Pamela began her career as a Dueling Piano Player for Ernie Biggs in 2013 in the River Market District of Little Rock. In January 2017, she transitioned to Willy D's Rock & Roll Dueling Piano Bar. In addition to Willy D's, she can be seen in other venues, Norwegian Cruise Ships and clubs across the US as well as rocking stages and festivals with her full band.

She continues to grow her craft, repertoire, and network of fellow musicians in what is a very unique niche in the music industry - piano bars!

Susan Erwin Prowse is an international touring artist born and raised in Hot Springs. After graduating from the University of Central Arkansas in 2002, Susan began her music career at Willy D’s.  From Little Rock, Branson, Los Angeles, Las Vegas and beyond, she typically performs internationally with over 200 shows every year.

As of May 2020, Susan is now our Willy D's Entertainment Director.

Susan released two Nashville produced albums in 2015 and 2016.  Susan met her husband, Cliff Prowse, on our stage at Willy D's in 2016.  They now tour internationally as the music duo - Cliff & Susan - armed with a piano, fiddle and guitar based in Little Rock.  Their high energy, interactive show keeps crowds entertained with over 1,000 songs in their arsenal, they bring a great mix of Country, Blues, Rock, Pop and Oldies to crowds of all ages.  A typical tour year includes Arkansas, Santa Barbara, Vegas, Amsterdam, Norway, Caribbean, and cruise ships. The duo released their debut single "Drivin' Me Crazy" in April 2020.

Matt Sammons is a Country singer/songwriter from Cabot, Arkansas. He's performed regularly at Willy D's Rock & Roll Piano Bar since 2006. Born and raised working on a cotton farm from the young age of 9 years old in McGehee, Arkansas, he draws inspiration from his country roots with influences such as Alabama, Diamond Rio, Clint Black, Collin Raye and Little Texas.​

Matt's band "Midnight South" is currently in the studio and performing in Central Arkansas.